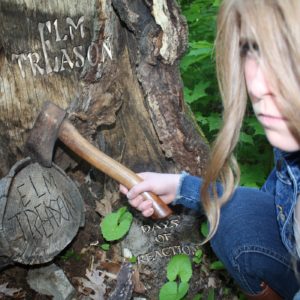 Back when our first album, Days of Reaction, was brand new – and all of our efforts were directed toward trying to get as many ears on it as possible – we were sending it to any radio station (terrestrial and streaming) that would possibly give it a spin. (Terrestrial stations always received a physical CD from us. Postage costs were insane).

One station in Illinois sent us a scathing email in response, explaining why our music would never be played on their station. It had nothing to do with the music itself, as it turned out. Rather, it was the CD cover that prompted our banishment from their airwaves – the image of a young blonde girl in denim, crouching down, holding an ax.

“Frankly, the imagery, which comes across as sophomoric and unimaginative, promoting a violent image, makes us not even interested in hearing the sounds on the disc. Haven’t we long since progressed from this kind of thing? An axe? (sic) Really? Amatuer (sic) Hour is over.”

There was more, but that’s the gist of it.

Being rejected for airplay because the music isn’t the program director’s cup of meat is one thing… but having an album cover be the reason for a flat out rejection, before the music is even sampled, especially when the artwork is anything but what it is claimed to be, was a first for us.

Is this cover really violent? Come on now…. 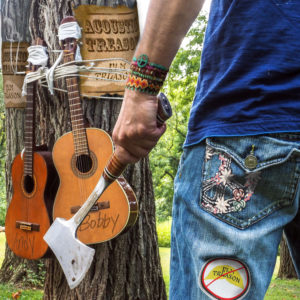 In truth, the shot used on the first album cover was an accident. Originally, a friend of mine was simply going to carve our band name in a tree stump (which was eventually used for some of the inner artwork). He was skilled with the hatchet. But his daughter was captured by an accidental snap of the camera as she was getting instructions for the next layout. She just happened to be picking up the axe as the shot was taken. Bobby and I loved the picture (which was almost deleted) and decided to use it for the cover.

No real meaning. Just a cool pic, we thought.

So, what’s with the hatchet on our second album, “Acoustic Trason?” Are we axe crazy? Is it the band symbol? Do we have a secret endorsement agreement with a hatchet manufacturer?

Actually, this time the use of the hatchet was deliberate. We wanted to create a paradoxical picture whereas a hippie-adorned dude, complete with counter-culture accouterments, decked out in “peace” and “love” decor, was carrying an instrument of destruction (violence, if you like). The contradiction was appealing to us. Bobby is the hippie photographed on the cover, carrying the ax, about the execute the two guitars that are tied and blindfolded to the tree, awaiting sentence for the crime of “acoustic treason.”

The concept of “acoustic treason” would require it’s own little story, which you can read here, if interested, but safe to say, we intentionally used the hatchet again, ostensibly creating a loose theme between the first two records – even though there really is none.

Obviously, we didn’t even bother sending the second album to that Illinois radio station.