WHAT DO YOU GET WHEN YOU CROSS ELM TREASON WITH CLASSICAL MUSIC? 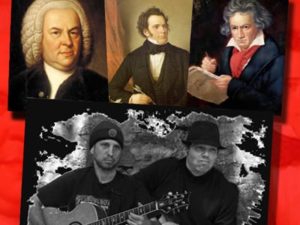 Well, what do you get when you cross Bach, Beethoven and Schubert with Elm Treason?

Some very interesting songs … and that’s no riddle.

I have fond memories of studying classical piano as a child. Later I studied music formally in college.  Andy also had a lot of exposure to classical music — as well as a dozen other genres–  at home.  His favorite composer is Beethoven and mine is JS Bach (with Beethoven at a close second place).  So it would be inevitable that these experiences would filter into our acoustic rock composing.

On our second album “Acoustic Treason,” the first guitar solo in a song called “I Gotta Write This Down”  consists of two melodic lines. The lower melody is a descending scale I play in the pre-chorus.  And the upper melody is actually first species counterpoint against it.  That’s just a fancy way of saying independent melodies going note against note simultaneously creating some aural beauty.  Some JS Bach influence was at work for sure.

“Home Alone Blues’  – another tune from the same album – has some Beethoven-esque harmonies in the piano during the chorus. Moreover, there is some nice tremolo left hand figures in the opening riff, which I unconsciously borrowed from a Beethoven piano sonata I used to play as a kid. (I don’t think he would mind too much).

On our third album, “Rhyme and Treason,” there are a few songs which feature orchestral instruments.

In “After All This Time,” I placed a woodwind quartet (flute, oboe, clarinet, bassoon) performing a four part canon based on the piano melody in lieu of a guitar solo.( 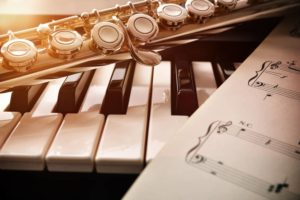 The guitar solos in “Too Sweet” also contains some violin like arpeggios.

“Tarantella” – an instrumental – could have easily been found in a Mozart type Theme and Variations composition as one of the variations.

But never mind all that technical ballyhoo.  What that all translates to is interesting and beautiful music to caress the ears and arouse the emotions.  After all, why do we listen to music at all?  Because it makes us feel. It satisfies something in us. It helps us connect with those feelings, those emotions, whatever they may be, wherever they may come from, wherever they go.

We write music for the same reason. We try tap into those things that moves us, that inspire us, that soothe us, that satisfy us … and in the process, we hope the music is able to connect with you, to satisfy you. If it does, then that’s Elm Treason’s raison d’etre.  That’s what it’s all about.

Love it! The fusion of rock and classical is brilliant. I especially love your classical piano intro on Voice of Treason.

Yes, Bobby’s intro on EYE TO EYE is magnificent. (Andy typing this). The thing I always say is that Bobby is very learned in the ins and outs of “textbook” music, but he lives outside of that box in creating what he does. His knowledge may get him to the valley, but his soul is what guides him through.