We  were still a fairly traditional “electric guitar-based band” in the very early ELM TREASON days.

We hadn’t released an album yet, but we were working on it…

In fact, we felt we were pretty close to releasing one.

As we raced to the end of those early recording sessions. I found out through a friend of mine in the advertising game that an agency in the Midwest was looking to revamp their campaign for a foreign car company. (I won’t name the company, but let’s just say that, at the time, the public were giving this company the collective “boot”).  They felt the car needed some music that was ballsy and screamed rock and roll with a definite vintage kind of vibe.

We didn’t care about being in the commercial so much, but the money was real good. And since eating food, keeping the lights on and having guitars that stay in tune were all things we were fond of, we thought, “Why not?”

“Get some power chords in there….and some sex….sexual tension. You know, rock and roll stuff. Go with power chords and sex.”

“Some power chords and sex?” Ummmm…….. Sure. That clears it up. Thanks.

It sounded cool, but frankly, this was not that kind of car. They were envisioning a “Born to be Wild” thing for something that was more suited to “Metro-sexual meets Hipster.”

I resurrected a song I had penned a billion years ago. It had that classic rock feel – something that sounded like the Kinks and Billy Squier might have had a baby. I was unsure, but since we had no time to write something new, I brought it to Bobby. He thought there was potential, but agreed it needed work.

Time was of the essence. We had exactly one weekend to re-write, arrange, record, mix, master and get our entry into the running with five other songs. We worked furiously. We pounded away on that thing, writing, re-writing…recording, re-recording … drums thumping…fingertips blooming with blisters…We dismantled and rebuilt this relatively uncomplicated song into something that ultimately had some cahones and a kickin’ “classic rock” groove. The sessions were frantic, spontaneous and magical. Bobby even fashioned two guitar solos that screeched of vintage rock and roll sexual tension. We came up for air on occasion, but the clock kept spinning all weekend long, daring us to keep up.  Sleep was not an option. We left Morpheus standing at the altar as we wore our brains and bodies down to a nub.

I still don’t know how we did it, but we pulled it off. We kicked the clock’s ass, pretty much grinding nonstop to early Monday morning, smelling like coffee and avocado by the end (I’ll explain that sometime). When it was all said and done, we were dead and done. After that “Sleepless in Staten Island” weekend, the only rhythms Bobby and I cared about for a while were circadian.

Honestly, we didn’t carry too much hope. Was this song actually car commercial material?

Really, for us, it was about the money. Was there another two-man rock band with a funny name anywhere that needed the money more than we? (Well, don’t answer that, actually…)

Anyway, fast forward a couple of weeks down the road.

We knew judgment day was approaching… and while we didn’t think we had a realistic shot, we were still anxious.

We waited. And waited.  And waited some more… until finally, at long last, a decision was taken. The smoke had turned white. The word came down. 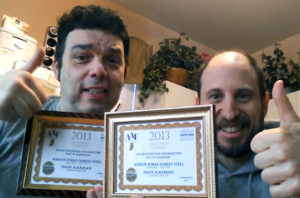 They picked OUR SONG! They picked an Elm Treason song! HELL, YES! we cried. (I still get the chills thinking back on it). We couldn’t believe it. We were actually going to have one of our tunes used in a genuine car commercial. The euphoria was indescribable. We’ll never forget it.

But frankly, our jubilation wasn’t really about having our song attached to a television ad. It’s not like we were dying to have our tune associated with a runt of a car that could be crushed by a falling box of Kleenex. Indeed, it was too cool to have our tune picked, but the real thrill about all of this was the money.

We admit it. The money.

It was all about the cabbage. And any hungry band just starting out in need of better equipment, instruments and studio time will take the green for hard work.

As a sort of cherry on the cake, we wound up winning a Golden Addy Award for cross-media excellence in advertising.

They actually gave us an award for a frantically thrown together reconstruction of something I made up three lifetimes ago when I only knew something like four chords on the guitar.  We’ll take it, no question. But we’d have traded that in for more cash in a heartbeat.

Incidentally, we’d come to find out that sales tripled during the commercial’s run. No kidding.

And what, pray tell, did I do with my half of the money? I went Ramen Noodle and bought my prized Epiphone Jumbo acoustic guitar – my axe of choice on Elm Treason’s next two albums. My girl. My love.

All hail power chords and sex! – and hasty sex, at that!  A match made in heaven!

An additional irony is that this “throw-away tune” wound up on our first album!

The song is called “With You.”

Eventually, we would change our entire approach to crafting the “Elm Treason Sound” (a story all its own), and would re-record everything we were working on before eventually releasing our first album “Days of Reaction,” but this version of the song (still unreleased – for now), and that entire weekend was quite a memory.

So good you had that chance and won, you guys rock

Indeed! And my Epiphone guitar that you see me (Andy) playing in so many of our live videos was the result of that! 🙂

The pleasure is all ours. 🙂 Thanks for takin’ the time to dig into the story. We LOVE being liked…. Or we like being loved….. something like that.