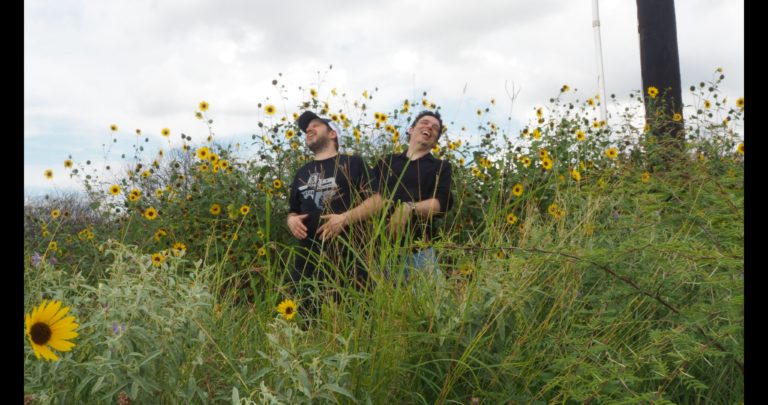 So, we were recently in Texas – outside of San Antonio – and decided to find a cool spot to take some new band pictures. It was July 4th. Potential locations were in abundance.

We ultimately chose the edge of a housing development that was still under construction. Good surroundings.

The area was void of people (being a holiday) and brimming with open space.. We weren’t actually near any of the construction.. just a few dead end roads, open fields and wild sunflowers..

We had a camera, two guitars and a change of shirts (for variety).

Our modus operandi: We’d shoot for ten minutes or so, change shirts, reposition the camera and shoot some more.

Peripherally, we had noticed that during the course of the shoot, a car or two would pass on the main connecting road (maybe 80 or 90 feet away), but thought nothing of it.

We were blissfully doing our thing when the crunching tires of a third car caught our attention – this time, it was not passing by on the main road, but turning toward us, lumbering along the gravel.

As fate would have it, at that precise moment, we were shirtless, in the midst of a wardrobe change. Half naked. Literally.

I hastily slipped on the shirt I had just taken off and started toward the police car to explain.

Four steps in, a bellowing voice exploded from the vehicle with a ferocity that probably warped the neck of my guitar: “Do NOT approach the vehicle! STAY where you STAND!”

Bobby, too, was dead in his tracks.

“I’m coming to you!” he rumbled, struttin’ toward us with a swagger that would have had Vin Deisel scurrying to his safe space.

I didn’t dare flinch. This felt so “Law and Order.”

When he reached us, he asked what we were doing here getting undressed.

I stammered slightly… “Oh that??? No, we weren’t getting undressed, officer,” I said, even though we technically were disrobing, “We are a band, on a photo shoot. We’re just taking pictures. That’s all. Honest.”

I could tell he didn’t buy it at first.

I continued making my case by pointing to our camera stand, the guitars and our change of wardrobe.

We were asked for our IDs (both out-of-state licenses, as it turns out). Background checks were executed.

While he was occupied running his check, Bobby discreetly pointed out to me that my fly was inexplicably open.

He inspected our car (from a distance), surveyed the photo shoot scene and asked us some “test questions.”

We told him “Elm Treason” and then showed him our Facebook page.

Talk about a turnaround.

Just as before, everything suddenly morphed on a dime… only this time for the better.

Things transformed instantaneously from “uh oh” to “deliciously awesome” in a matter of nano-seconds once the office saw our page.

He immediately was rebooted from a hard-nosed “officer of the law” to a wide-smiling “regular guy” (no insult meant in any way). He softened like whipped butter in the Texas sun. He became vigorously inquisitive, but not in an “interrogation room” kind of way. He was loving what he saw.

He became ebullient. Animated. He asked us lots of questions about Elm Treason.

He then opened up and started telling us about the town we were in. Fully conversational.

All of this was happening two days before a scheduled LIVE Facebook event.

He promised to check us out.

He turned out to be extremely nice.

However, to be quite frank, we had no real preconceptions that he would actually “check us out.” We hear that a lot. We thought it was just a polite thing to say.

Well, as it happened out, he not only watched our Facebook LIVE event, but ever since our “confrontation,” he has become one of our most interactive fans on the page… and he even purchased two of our albums.

From being spotted by two locals (in those two passing cars) who saw a couple of guys acting “weird” (in a spot that had recently become known as a site of “nefarious teen activity”) to gaining a uniformed super fan who has already spent money on our music, this was as good as it got for us.